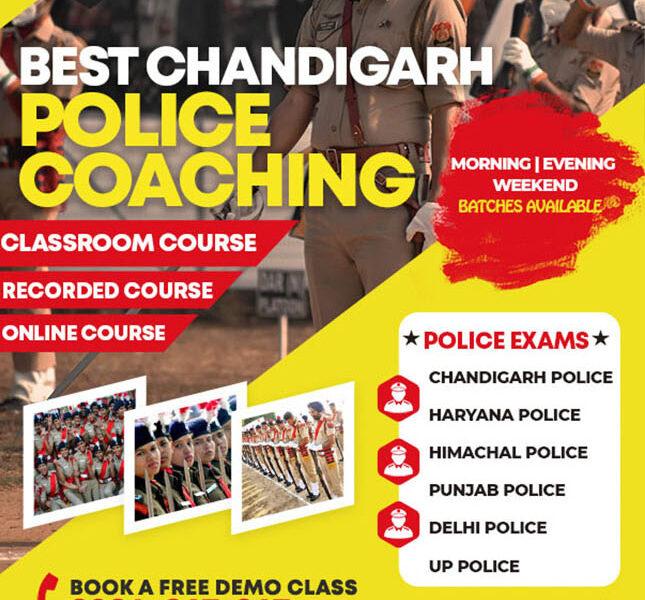 Chandigarh is one of the simplest planned cities in India. As a union territory, the town is ruled directly by the Union Government and also isn’t a part of either state. Chandigarh Tricity covers three regions in north India that comprise Chandigarh, Panchkula, and also Mohali. Also, Chandigarh police Headquarters are at Chandigarh. Chandigarh Police also keeps the town Beautiful. Chandigarh is a model city as was dreamt by its planner Le-Corbusier.

Competition Guru accomplished goals of all students preparing for police exams or other exams like by providing them interactive environment in addition to clearing concepts coaching classes. We offer the details and knowledge of all competitive exams written test and interview both. These Police Constable Coaching in Chandigarh coaching classes are designed in very effectual manner the strategy for coaching is completely basis on every students strength and weakness. The duration of coaching for Competition Guru is Five to Six months. In these Five to Six months mainly focus is on clearing concepts as well as teaching shortcuts of the whole syllabus. All the sections are started from basics.

Candidates applying for the CHANDIGARH Police Constable Post must ensure that they fulfil the below-mentioned eligibility criteria. Read further to get more details of the Chandigarh Police Eligibility for Constable Post:

All candidates [including ex-servicemen], shall be put through a Computer Based Test/ OMR Sheet Based Test (Tier-1 is of 50 Marks, and Tier-2 of 50 Marks)

CBT/ OMR Sheet Based Test shall be based on General Knowledge/ Current Affairs, I.T. Knowledge, IQ, Reasoning, Numerical Ability, Ethics, and questions shall be multiple choice objective types and will carry one mark for every correct answer and a negative marking of 0.25 for every wrong answer

will be conducted for the candidates who will qualify in the Written Exam. The category Wise Physical Efficiency Test and Physical Measurement Test requirements are given below:

Being one of the well-known institutes in Chandigarh, Competition Guru is involved in providing the students appropriate guidance and support in their respective fields For Police Coaching In Chandigarh. The best part of the services is that a candidate enjoys good job satisfaction in addition to career growth due to use of knowledge and management skills both. Through these Services a candidate will acquire job in most reputed government department like Chandigarh police. We offer Top Police Coaching In Chandigarh.

Chandigarh is one of the most outstanding planned cities in India. The city is located in charming setting with the ragged skyline of Shivalik hills as its back drop. As a union territory, the city is ruled unswervingly by the Union Government and is not part of either state. Chandigarh and adjoining cities of Mohali (Punjab) and Panchkula (Haryana) are together called Chandigarh Tricity Chandigarh police Head quarters is located at Chandigarh. Chandigarh Police has been playing a key role in keeping the city striking- Chandigarh a role model city as was dreamt by its planner Le-Corbusier.

As competitive exams are objective types and chiefly depend upon speed. So one just have to answer the question in whatever way. Competition Guru Provides the Best Institute For Police Coaching. The team keeps on working on new shortcuts for maths plus reasoning. Students feel great hurdles to remember the general studies. So the squad has introduced methods of association and 24-7-30 revisions which make this portion a cake walk for students.

The institute material is designed in such a way that it will start with clearing fundamentals in addition to basics of each portion. Competition Guru Provides the Police Constable Coaching In Chandigarh. Then it focuses on the questions equivalent to toughness level of different exams. After that a huge question bank is provided for training.

In this cut throat competitive environment we think that we dont require any teacher, because in that manner the traffic is more on one side. Competition Guru Provides the Police Sub Inspector Coaching In Chandigarh. We need passionate facilitators who will share their strengths, experience as well as expertise with the government job aspirants. We have very tough recruitment process.

After recruitment all the teachers are given simple environment and we put our best efforts to make them satisfied by fulfilling their material and personal needs. They have given full opportunity to experiment new and ground-breaking teaching techniques after discussing with teachers.

Apart from updating regularly on blog, through mail and sms, the counseling and guidance is also available through many mediums like at our center, through mail, phone and chat etc.

We are very serious to conduct real test like conditions where students are strictly asked to appear in the mock test. The detailed report subject wise and rank is independently given to the student. It will benefit them to access their strength and weakness and will help to reduce exam phobia. Competition Guru is the Best Institute for Police Coaching. The mock tests are designed after an extensive research so that they should be according to the pattern and the difficulty level of that particular test and different strategies are given to the students so that students can decide which the most excellent strategy is for them. These days bank exams are getting online, we have launched a website particularly dedicated for giving them access to online testing.

There are some students who necessitate personal guidance and interaction to clear the doubts and get solutions for their problems. Even the specialized career options obtainable for them are informed to them. We have separate doubt session of four hours on every Saturday.

To keep the spark ignited and solve individual doubts of students, regular communication programs are organized by inviting successful students and eminent officers of banks. Competition Guru Provides the Police Constable Coaching in Chandigarh. Here students get a chance to clear their doubts about the way to prepare and what is actual life after clearing the test and what they are actually looking for?

The biggest difficulty that most of the students face is that they hardly get a chance to get guidance after their coaching period is over after 2-3 months. Competition Guru Provides the Police Sub Inspector Coaching In Chandigarh. So we have introduced a new methodology by introducing this concept. In this way once anyone become our student, he will remain our student until he clears the exam and all the resources are uniformly available to old as well as new students without any distinction. Join Competition Guru for best Sub Inspector Coaching in Chandigarh.

Those candidates who want to clear the exam for constable posts, have totake Burden for the test. They ought to commence their preparation consistent with Chandigarh Police Exam Pattern  for Chandigarh Police constable recruitment. Candidates require to join our academy Competition Guru in Chandigarh to crack this exam on the very first attempt. So candidates need to read our articles cautiously.

A lot of applicants are expecting the employment of Chandigarh constable. To organize well for a written exam you’ve got to stay in mind the Chandigarh Constable Written Exam Pattern 2021 plus prepare consistent with an equivalent. You have to attempt a Mock test specially compiled by our Competition Guru Team and provides Constable coaching. Only then you’ll be all set to give a good performance as compared to other students. First of all, you’ll require to download Chandigarh Constable Paper Pattern officially then you’ve got to start out preparation for the exam. Candidates need to start their

The detailed syllabus for all subjects of Chandigarh Police Constable Online Computer Based Examination is given below:

This section will include questions on problems relating to Number Systems, Computation of Whole Numbers, Decimals and. Fractions and relationship between Numbers, Fundamental Arithmetical operations, Percentages, Ratio and Proportion, Averages, Interest, Profit and Loss, Discount, Mensuration, Time and Distance, Ratio and Time, Time and Work.

The questions will be asked related to India and its neighbouring countries especially about Sports, History, Culture, Geography, Indian Economy, General Polity, Indian Constitution, Scientific Research etc. These Questions will be such that they do not require a special study of any discipline.

Competition Guru at Chandigarh  is the best coaching for  Chandigarh Police  Exam. We have been providing regular classroom courses for Chandigarh Police Uttar Pradesh Police Sub Inspector (S.I) exam since the time of establishment. With this long and focused experience we have become first choice among students appearing for Sub Inspector exam. We have proved time and again by our passing percentage (approx. 90%) that why Competition Guru is number one coaching for Chandigarh Police Constable exam. We have specialized batches for Police force exams both in Hindi and English medium at all our centres. The best part of our course is that students get opportunity to learn with real life examples, short tricks, easy to understand and remember concepts and this gives them the confidence which results in cracking the exam in very first attempt. We have several branches mainly in Delhi, Mohali, Chandigarh, Panchkula, Ropar, Pinjor, Baddi, Nawanshahar, Machhiwara, Lucknow, Ghaziabad, Noida,  and so on.For best Chandigarh Police exam coaching,Enroll yourself at Competition Guru for 100 % result.

Along with the preparation, all the aspirants are allotted enough time in which they can get their doubts cleared and achieve better. Chandigarh Police Coaching in Chandigarh helps the students to get access to video lectures and video recordings as well as the subjects they desire so that when they do self-study, no topic remains unclear. Competition Guru has achieved a because of the students who have achieved great success and grades in Chandigarh police exam. Best Chandigarh Police Coaching in Chandigarh helps to ease your process of study. Self-study is stimulating, but it is not necessary that you will get interested in it after giving it your all. The cause for this is a lack of resources and the failure to enlist the assistance of a mentor but Competition Guru helps you with it by meeting your needs. Errors are common in studies; but Top Chandigarh Police Coaching in Mohali has pros that can help you figure out your mistakes, direct you, and correct them. So, getting assistance in preparation from the Top Institute Competition Guru will be the best option.

To prepare for the exams you need to have the study material as well, that is built in the right format to impart knowledge, Competition Guru is one of the best Chandigarh Police Coaching Institutes in Chandigarh and helps you get access to the important study material. Also, the mode of preparation helps to improve and ace your results. Competition Guru builds your skills and knowledge for the Chandigarh Police exam in the true sense. Also, it is seen that the faculty makes sure that every doubt of each aspirant is clear so that they can achieve better in exams and have a bright future.

We are glad that you preferred to contact us. Please fill our short form and one of our friendly team members will contact you back.